Both a smoker and a barbeque (BBQ) allow you to cook meat long, slow, and at lower temperatures than a grill. A smoker cooks food using smoke, while in a BBQ, you use direct heat. Both methods are ideal with large cuts of meat.

There are different cooking methods for meat and other foods. A lot of it depends on your taste preferences and what cooking equipment you have on hand. In this article, I am going to cover the differences between a smoker and a BBQ.

What is the Difference Between a BBQ and a Smoker?

To fully understand the differences between a BBQ and a smoker, we should first examine the two cooking methods. For better comparison, it’s also useful to look at the grilling method and what it is. All three ways are mainly to cook meat, but you may also use them for other foods like vegetables. Different pieces of equipment can be used for each process, although you can also find a cooker that allows you to use it for all three.

How to Grill Meat

Grilling is one of the most popular ways of cooking meat. It’s easy to do and produces tasty meat. Whether you cook the meat in a special grill or in your regular oven, the two most important facts are that it is fast and uses high heat. Charcoal or gas generate the heat, and cooking temperatures in a grill can reach 350- 500F.

How to BBQ Meat

When most people hear the word BBQ, images of juicy pieces of meat and a delicious sauce come to mind. Barbequing is, in fact, a method of cooking. Unlike grilling, the barbeque method is usually for very large cuts of meat. A whole turkey or a beef brisket are just two examples.

Barbequing is a slow method and happens at a lower heat. You are looking at temperatures of around 190- 300F. The key to this method is to maintain the temperatures throughout the duration of the cooking. The heat typically comes from burning gas or charcoal, and cooking can take several hours.

How to Smoke Meat

The third cooking method I am going to cover is smoking. This approach is much like barbequing in that it uses low indirect heat and takes much longer than grilling. The main difference is that a smoker cooks the meat with smoke, which adds a unique flavor to it.

The cooking temperature for smoking is usually around 125- 175 F. Of the three, this method takes the longest and requires the greatest skill. You could be looking at a cooking time of a whole day, in some instances.

Is a Smoker Better Than a Grill?

Whenever someone asks me which the better method between smoking and grilling is, I have to consider that each method has different applications. The decision of which method to use depends on the situation and the preferences of the person asking.

I recommend using a smoker in these situations:

A grill is ideal in these cases:

Can You Use a Smoker As a BBQ?

Smokers and barbeques are very similar, and the use of indirect heat and smoke in the former is the primary difference. You can use a BBQ as a smoker by separating the meat from direct heat and cooking it using the smoke instead. Using a smoker as a BBQ depends on the type of smoker because most are made specifically for the smoking method. However, many cookers can grill, barbeque, and smoke your meat and have divisions for each of these methods.

The cooking method and the choice of fuel impact how healthy the meat is. Smoking can produce charring in the meat and add a smoky component. There has been a lot of research about the health impact of eating smoked meat often. The smoke can contain potentially carcinogenic chemicals, but there are ways to reduce the risk. One of these is removing the charred bits on your meat.

Can You Smoke Steak on the Grill?

Yes, you can smoke steak on the grill, whether it is a gas or charcoal grill. The main thing you have to do is remove the direct heat from the meat.

Can I Smoke Meat on a Charcoal Grill?

Yes, you can use a straightforward method. You need a pan of water to slow the cooking down. You place the cooking grate and meat above this pan before you close the grill. If you are using a charcoal grill, you also need to add damp wood chips to the coal.

Both smoking and BBQ produce delicious meat, so it’s a matter of which one you prefer to use. 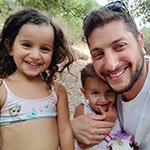 Beyond being married and a father of three my real passion is to grill and smoke food. ever since I was young I have enjoyed smoked meat. If you want to know more about me check out the about page.

Hi I’m Almog. and I’m the guy behind My BBQ Smoker. I just love smoking good meet as much as possible.

how to smoke meat